A decade and a half in the making, the Recreational Quota Entity, or RQE, is a federally authorized body that may legally purchase, hold, and manage commercial halibut quota which can be applied to supplement the annual allocations of the guided recreational fleets in Southeast and Southcentral Alaska (Areas 2C and 3A).

The RQE is authorized to collect money from charter operators, obtain loans, and apply for grants and other funding sources to help fund halibut quota purchases, though the details of the funding program are still in development.

The RQE may permanently transfer up to 10% of commercial halibut quota holdings in Area 2C and up to 12% of holdings in Area 3A toward separate pools for each area that can be used in combination with annual allocations to allow more liberal charter limits than base allocations would support.

Here are the mechanics of the RQE that the North Pacific Fishery Management Council settled on during final action:

The IPHC, as its name indicates, is made up of United States and Canadian representatives, following an international treaty the countries signed in 1923. The Council is the United States Federal fishery management group. The Council works with information collected and analyzed by ADFG, as well as stakeholder input, to make recommendations to the IPHC on management for Alaska halibut fisheries.

Each year, the IPHC uses surveys to estimate the number and age of halibut and the number of spawning females. Scientists then calculate how many pounds of these fish can be caught without hurting the overall population.? Below is an example of what this might look like; it is not an example from any given year. 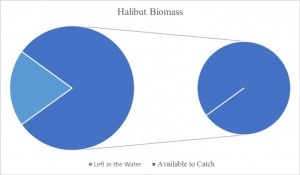 A percentage of the pounds of halibut available to catch are set aside at this point for subsistence fishing, bycatch mortality, and unguided recreational sportfishing. Below is an example of what this might look like; it is not representative of any particular fishing year. 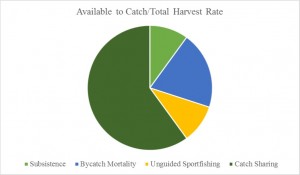 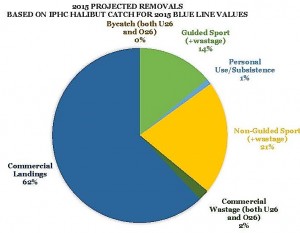 The remaining pounds are the halibut allocated under the Catch Sharing Plan: commercial halibut fishing and the charter/guided fishing sector. In Southeast Alaska, regulatory area 2C, the guided sector typically receives 18.3% of this number.* That percentage only changes if the pounds available to catch go above or below certain numbers. The chart below shows 18.3% in blue. 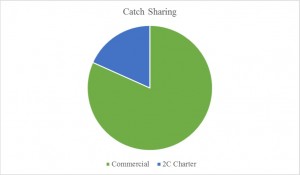 Management rules, like no fish over 43 inches or under 80 inches, are based on how many pounds are available within the 18.3%. Even though the percentage remains constant, the number of pounds changes based on the calculation scientists use at each step described above. ADFG and stakeholders, like SEAGO Board members, analyze the pounds available, how many fish that would represent for guided anglers, and different management measures. They then make suggestions to the Council.? The Council considers these suggestions and passes its recommendations up to the IPHC for approval.

*Area 2C is the IPHC region for Southeast Alaska, south of Yakutat. Yakutat is managed as part of the 3A region with some different management measures. The program discussed below would apply to both regions, 2C and 3A, though examples have been limited to 2C for brevity.

For updates on the status of the RQE, sign up for SEAGO's newsletter.